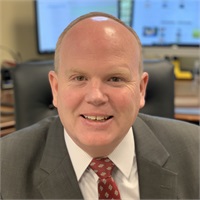 John T. Gunning, Jr., AIF®, CLTC, is the Vice President & Treasurer of Legatus Wealth. John is a thorough and devoted professional; who has accumulated more than 20 years of experience in the financial services industry. His consistent and comprehensive approach to financial planning enables John to successfully develop and implement goal based wealth management strategies for his clients.

John earned his Bachelors of Science from Babson College, and worked at Bank of Boston before joining the financial planning industry in 1995. In 1999 he moved to Commonwealth Financial Network, and has earned recognition for his consistent professional achievement as a Commonwealth Advisor. Such recognition includes being named as a 2018 & 2019 Five Star Wealth Manager,* and being named as a member of Commonwealth’s President’s Club in 2018 & 2019, this distinction recognizes success based on a ranking of annual production among Commonwealth’s network of 1,800 financial advisors. John holds the Accredited Investment Fiduciary (AIF®) and Certification in Long Term Care (CLTC) designations. John’s specialty is providing individuals, families, and small family businesses with all-encompassing financial planning that covers diverse elements from estate and tax planning to investment management. His greatest satisfaction comes from guiding his clients to success with their financial affairs throughout their entire lives, and his capacity to help clarify and prioritize goals makes him an invaluable asset to everyone he works with.

John was born and raised in Canton, MA and continues to live there today with his wife Kristen, a physician at Massachusetts General Hospital. He also greatly enjoys spending time with their four children: Patrick, Kevin, Michael, and Meghan. In his down time John appreciates the seasonal activities available in New England; including skiing during the winter, and spending time on Cape Cod during the summer.

*Based on 10 objective eligibility and evaluation criteria, including a minimum of five years as an active credentialed financial professional, favorable regulatory and complaint history, accepts new clients, client retention rates, client assets administered, education, and professional designations. 568 Rhode Island wealth managers were considered for the award; 131 (23% percent of candidates) were named 2019 Five Star Wealth Managers. (The criteria provided reflects the most recent year for which advisor received the award. The criteria used, the number of wealth managers considered for the award, and the percentage of those who receive the award, may vary from year to year.) These awards are not indicative of the wealth managers' future performance. Your experiences may vary. For more information, please visit www.fivestarprofessional.com.